Which type of hunter are you?

Through the years I have had the opportunity to observe individuals, including myself, along with their hunting behaviors.  It always amazes me how unique the individuals are themselves, but their hunting behavior always seems to fit into four categories: the Killer, the Outdoorsman, the Sportsman, and the Master Hunter.  When developing the Skunk Ape Tree Stand, I put a lot of thought into how to meet the needs and expectations of these four types of hunters.

The Killer gets a rush out of just killing deer.  He doesn’t care if it’s a spotted fawn, a doe or a twelve point buck.  He kills whatever he sees. He goes hunting for the excitement of killing.  There is nothing wrong with it. I was a killer for twenty years. If I saw four deer, then I killed four deer.  In other words, the Killer is a meat hunter, he’s there to eat. The Killer loves to hunt, and don’t get me wrong, he loves to see deer, but he’s there to see those deer and kill those deer. The Killer has the potential to metamorphizes into a Master Hunter. The thrill of the kill provides information subconsciously to the hunter about the terrain, deer behavior, what the deer are eating, their food sources, their water sources, the weather and scent control.  The Killer knows everything he needs to know to make the kill, except for patients. The Skunk Ape Tree Stand provides comfort, freedom of movement and a steady rail for multiple kill shots, exactly what the meat hunter requires.

The Outdoorsman is a hunter that likes to get out of the house. He’s going to buy a rifle, some camouflage, a deer stand and then he’s done.  He would like to kill a deer, however, if he doesn’t, it isn’t the end of the world. The Outdoorsman likes to go out, hang out with his fellow hunters and friends, cook and sit around the campfire.  To him, the thrill isn’t necessarily to kill a deer. For example, if it’s too cold to clean it, the Outdoorsmen won’t kill it. He goes hunting because he likes to be outdoors. The Outdoorsman gets the same satisfaction out of fishing, taking a walk in the woods and sitting around a campfire as he does killing a deer.  He just enjoys being outside. The Skunk Ape Tree Stand is perfect for the Outdoorsman because of the comfort, the movement and the safety of the stand provide hours of satisfaction while being in the great outdoors. He gets to enjoy the great outdoors in greater comfort. My daddy, the late Rhett Butler Sr., was an Outdoorsman hunter.  He liked being out there. He would see deer every time he would go hunting and I was always perplexed as to why he wouldn’t shoot them. My daddy didn’t sit in a lot of deer stands, but he loved to sit in a Skunk Ape Tree Stand.

The Sportsman is the type of hunter that only likes to kill the biggest deer out of the group.  The Sportsman buys everything you need to hunt with plus some. He is going to hunt only where there are big deer, no matter the cost or how far he has to travel.  I have done this, and I have enjoyed every bit of it. The thrill to the Sportsman is killing the big monster. The Sportsman has the patience and the strength not to be persuaded by inferior game. The Skunk Ape Tree Stand is perfect for this person because it provides the steady rail, the movement and the comfort for the Sportsman to patiently wait for the monster buck. 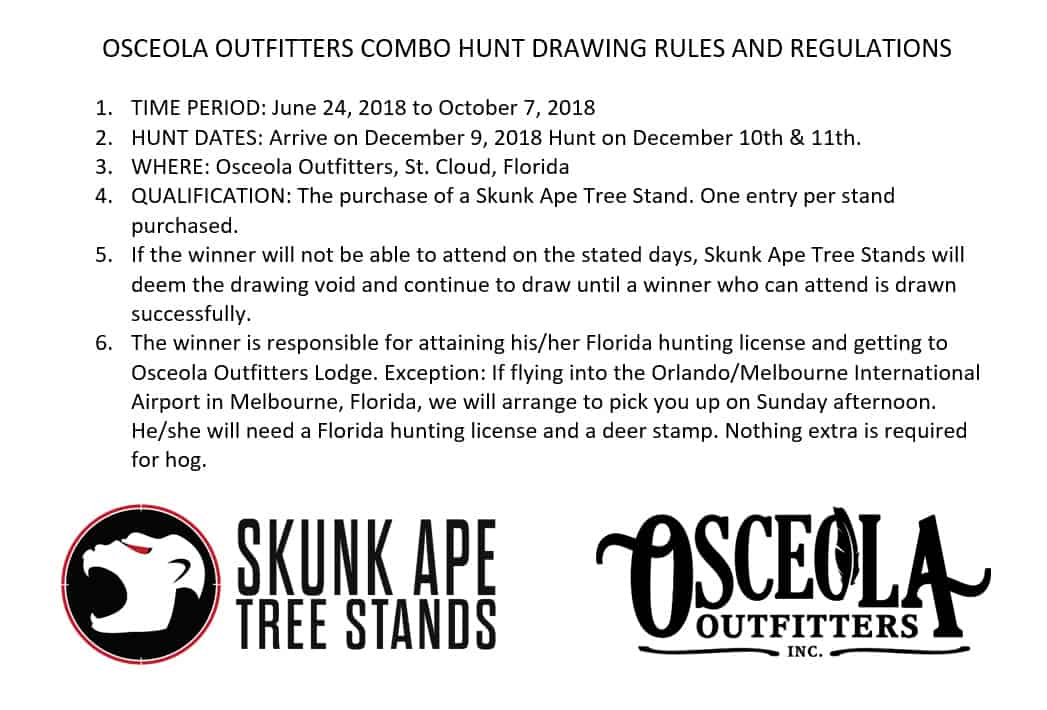