Coyotes are an essential part of North America’s ecosystem, but they can also be a pest.  They’re notorious for eating pets and small livestock. They’re also numerous in many areas, so their numbers need to be controlled, and the most effective and humane way to do that is by shooting.

Some places even allow coyote hunting year-round to thin the population.  The good news for hunters is that coyotes are a challenging and elusive quarry that makes for great sport.  The bad news is that it’s challenging enough that many find it hard to settle on the right techniques.

As tricky as it is, coyote hunting is probably the fastest-growing genre in the USA. The main reason for this is the rise of coyote calling. Coyotes are solitary animals that cover a lot of ground and can be extremely stealthy.  Just staking out a likely spot will probably give you a lot of frustrating days and few or no coyotes. However, if you imitate the call of a coyote mating cry or the sound of a prey animal in distress, you can lure them towards your position.

The ideal weapon for coyote depends on the terrain you’ll be hunting over. Most hunters use a rifle with a caliber between .220 and 6mm. If all you have is your deer rifle that will be more than enough to do the job. Semiautomatics in .223 are becoming very popular for this task.  Some people use high-velocity ammunition in their .22LR rifles to do the task, but this is less humane as some coyotes are borderline larger animals.  The .223 is fast becoming the perfect choice because they’re accurate, flat-shooting, have enough punch and they allow a rapid follow-on shot if required.  Some people like to bow hunt coyote by using a crossbow or a large compound bow to practice their skills for larger game hunts like deer.

Nine times out of ten a rifle is the ideal weapon if you aren’t into bow hunting, but there is an exception. If you’re going to be calling in dense terrain a shotgun is far better.  In woods or areas with thick brush, and at night, a coyote can get pretty close before you spot it. If one pops up thirty yards away a 12-gauge gives you a much better chance of bringing it down with a single conclusive shot. A pump gun with a tight choke is the ideal setup; for ammunition go with magnum loads and No. 4 buckshot. This combination will put a tight, hard-hitting pattern into a coyote up to around 35 yards away.

The next priority is camouflage, and this area needs to be done up tight. Coyotes are among the wariest North American animals, and they’re easily spooked by anything that’s even slightly out of place. Camouflage is a must, and make sure any exposed skin is concealed too.  Military camouflage cream works or you can go for gloves and a face veil.  Using compact hunting binoculars or a laser rangefinder will help scope out areas properly and help judge the appropriate distance without getting too close.

Coyotes are very good at spotting movement, so once you’re in position stay as still as possible. If you’re in a sitting position a cushion can make you more comfortable and less likely to fidget. Keep sound to the minimum that starts as you move into position.  No slamming the car door or talking on the walkie talkie, and if you’re hunting with a friend don’t chit-chat as you wait for your prey to show up.  Don’t smoke or chew either.  Coyotes will pick up the smell a long way off, and they associate it with people.

When you’re choosing your position come in from downwind, and try to set up with some kind of obstacle behind you. Given the chance coyotes will try to circle round anything that interests them and approach it from downwind, so they can scent it as early as possible. If you can place yourself with a road or open field behind you that should deter them and help you spot them right away.  If they do get downwind they’ll be on you before you know they’re there.  The coyote’s surprise of finding a hunter rather than whatever animal they were expecting can trigger aggression.

Once you’ve settled into your position allow anywhere between five and 15 minutes soak time before you start calling. That will let any disturbed wildlife settle back down, so an incoming coyote won’t sense anything unexpected. Then you can get down to business. 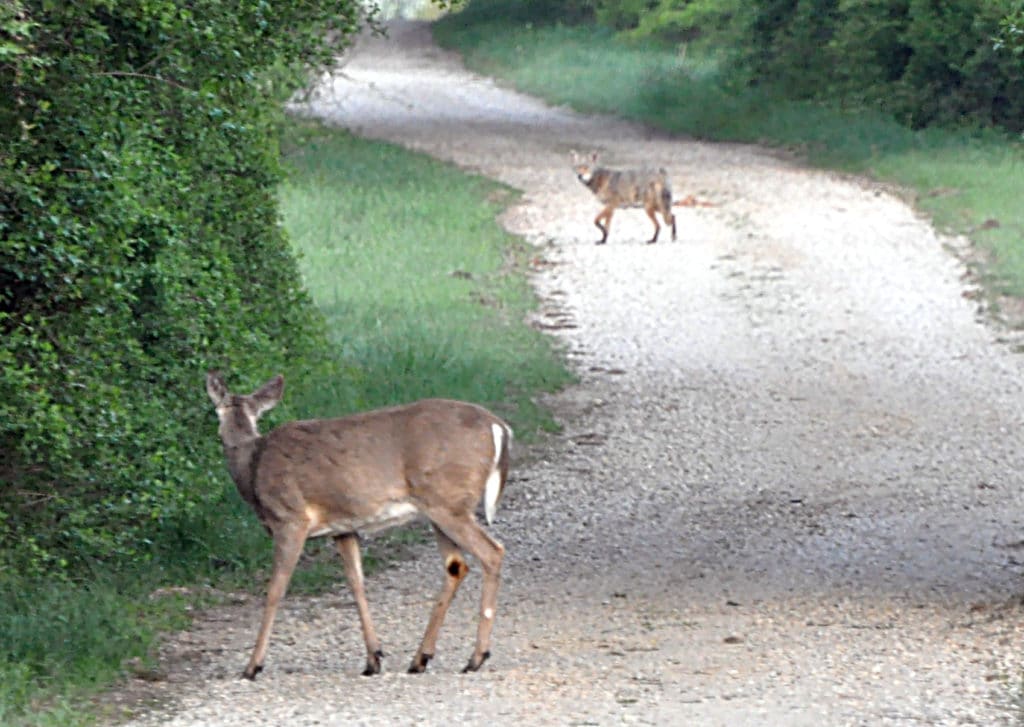 Calling coyotes still isn’t easy, of course. You need the right equipment and the right techniques, or you’re still likely to end up with an empty bag. You also need to take some care. Coyotes are predators, and while they’re much smaller than the closely related gray wolf they might still attack if cornered or threatened. A big coyote might weigh close to fifty pounds and can deliver a nasty bite.  They can also carry rabies. It’s vital you plan your hunt so that you keep the advantage over the animal at all times. Part of that is picking a suitable weapon.

Some coyote hunters have a single call they swear by.  It definitely doesn’t hurt to have a selection available. That lets you tailor your technique to the location and season. If you do decide to go with one, a rabbit squealer is very popular. In fact anyone who’s going after coyotes should have one in their arsenal.  The sound of an injured rabbit in distress should draw in any coyote in the area. Calls mimicking other small prey species can work well too.

If you’re hunting in midwinter be aware that that’s the coyote mating season.  You can take advantage of it. Get a coyote howler and practice mimicking the invitation call of a female in estrus, then sit back and wait for any nearby males to head for you. There are a variety of other calls too, some of which work all year round. Coyotes are territorial and will respond to challenges from other males; they also react to the distinctive squeal of a coyote in distress. They’re very vocal animals, with quite a complex social life, so learn all the sounds they make and use the ones that fit the situation best.

One example of coyote sociability is the way females without pups will often help another to raise hers. They’re protective of pups, so if you can mimic the distinctive rapid squeal of pups in distress you can get some very good results. Try this tactic in late winter or early spring, when the pups are usually in the den and the mother will probably be out searching for food.

Whatever call you use, put some feeling into it. Work to make them as realistic as you can; that will make a huge difference to your results. Also give coyotes something visual to focus on if you’re in open ground – they’ll expect to see something, and it’s a big help if you can draw their attention away from you. An old stuffed toy will do, but a better option is a battery-powered decoy that moves realistically. Don’t spend a fortune on one that mimics an exact prey species; as long as it moves something fuzzy-looking, ideally with an intermittent motion like a wounded animal, it should grab the coyote’s attention. Place your decoy upwind of you and in a location where you can get a clear shot at the decoy and the approaches to it.

Some patience is needed for successful calling, so don’t give up if coyotes don’t appear right away; keep calling for at least 20 minutes before relocating. When you do give up on that spot, back out of it as stealthily as you came in, then move across the wind at least half a mile and set up again. Settle in for a while then repeat the process. Eventually, your calls will reach the ears of a curious coyote, and the hunt is on. Get your technique right and this is a really worthy form of hunting against a smart and resourceful prey, so it’s definitely worth the effort.

START PREPPING FOR YOUR NEXT COYOTE HUNTING TRIP

If you’ve done what we have outlined by picking the right guns/gear, finding the right position and picking the right call/calling techniques, it shouldn’t take long for you to bag your first coyotes out in the wild.  Coyotes are some of the easiest game to get permits for as they run rampant in many areas.

If you stick to our guide that just walked you through how to hunt coyotes, you should end up in great shape on your next outdoor coyote hunting excursion.